'Give the People What They Want' was the nineteenth studio album by The Kinks, released in August 1981 in the US, and in January 1982 in Europe. It was delayed because Ray Davies wanted to produce a full-length video for the album, but financing fell through and this didn't happen. While working on the sessions, drastically different versions of the songs were taped and cut to acetate, showing what Davies thought the next album could/should be, but the people at Arista thought differently, and insisted that some of the tracks be edited down, and ended up seconds or even minutes shorter on the finished album. One of the most notable casualties was 'Around The Dial', with the released version running at 4:48, while the acetate version runs to nearly eight minutes, although a lot of those extra minutes are the intro of someone turning the radio dial. The title track is approximately a minute longer than the officially released version, and while a few are suspiciously close to the original versions ('Killer's Eyes', 'Back To Front', 'Add It Up'), a closer listen reveals that these are slightly different mixes. The acetate version of 'Entertainment' is the original 1981 mix and not the glossy version that was ultimately released on 'UK Jive' in 1989, and 'Bernadette' is not the version we know from 1982's 'State Of Confusion', but a much rawer version with Dave Davies on the lead vocals. There are two extra bonus tracks, with the version of 'Massive Reduction', the b-side of 1981's 'Better Things' single, being a completely different version to the one released in 1984 on 'Word Of Mouth', while 'Noise' was probably recorded some time in 1981 and canned, but ultimately released as a b-side to 'Come Dancing' in 1982. 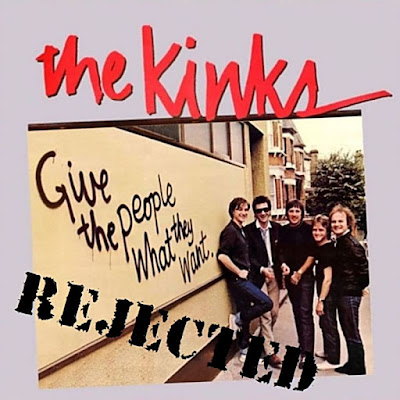 Many thanks to Michael for letting me hear this one.
on March 16, 2021

Email ThisBlogThis!Share to TwitterShare to FacebookShare to Pinterest
Labels: The Kinks

This blog aims to post albums that currently don't exist in the mainstream, but which I think should. They will be albums rejected and shelved by record companies, collections of rare tracks and b-sides, or theme-based compilations of an artist. There will also be imagined albums which could have been recorded in an alternative universe. Hope you enjoy these albums that I wish existed.

NO FILES ARE STORED ON THIS SITE. Download this file to listen to the music. https://disk.yandex.ru/d/D1rzj1k_CBa61A

Search ‘band name aiwe’ (e.g. dylan aiwe) for my albums. If that doesn't work I'll give a search hint at the end of the post. For full instructions, download this Word doc. https://disk.yandex.ru/d/c3Hry6qEWePOLA

If Soulseek doesn't work for you then drop me an email at aiwe2@yahoo.com. ...and on guitar biogs and track listings https://disk.yandex.ru/d/SgEzcp9sQq9nZg